This is the latest wine project from the Chartier team and its most premium wine, Fuentes del Silencio X Chartier. A Spanish red wine, from terroirs located in Castilla y León (in the northwest of Spain) and from vines with an average age between 50 and 120 years. This wine is made in conjunction with the Fuentes del Silencio estate, a fairly new project from 2014 that aims to recover part of the forgotten pre-filoxeric century-old vineyard of the region where the owner, Miguel Alonso, comes from. This new estate, which is part of the Grandes Pagos de España has been classified as organic for already two years and already has a large vineyard aged between 50 and 150 years with of course all the typical varieties of the region as Mencía, prieto picudo, garnacha, doña blanca among others. This new wine has a confidential production of 668 bottles in 2018. 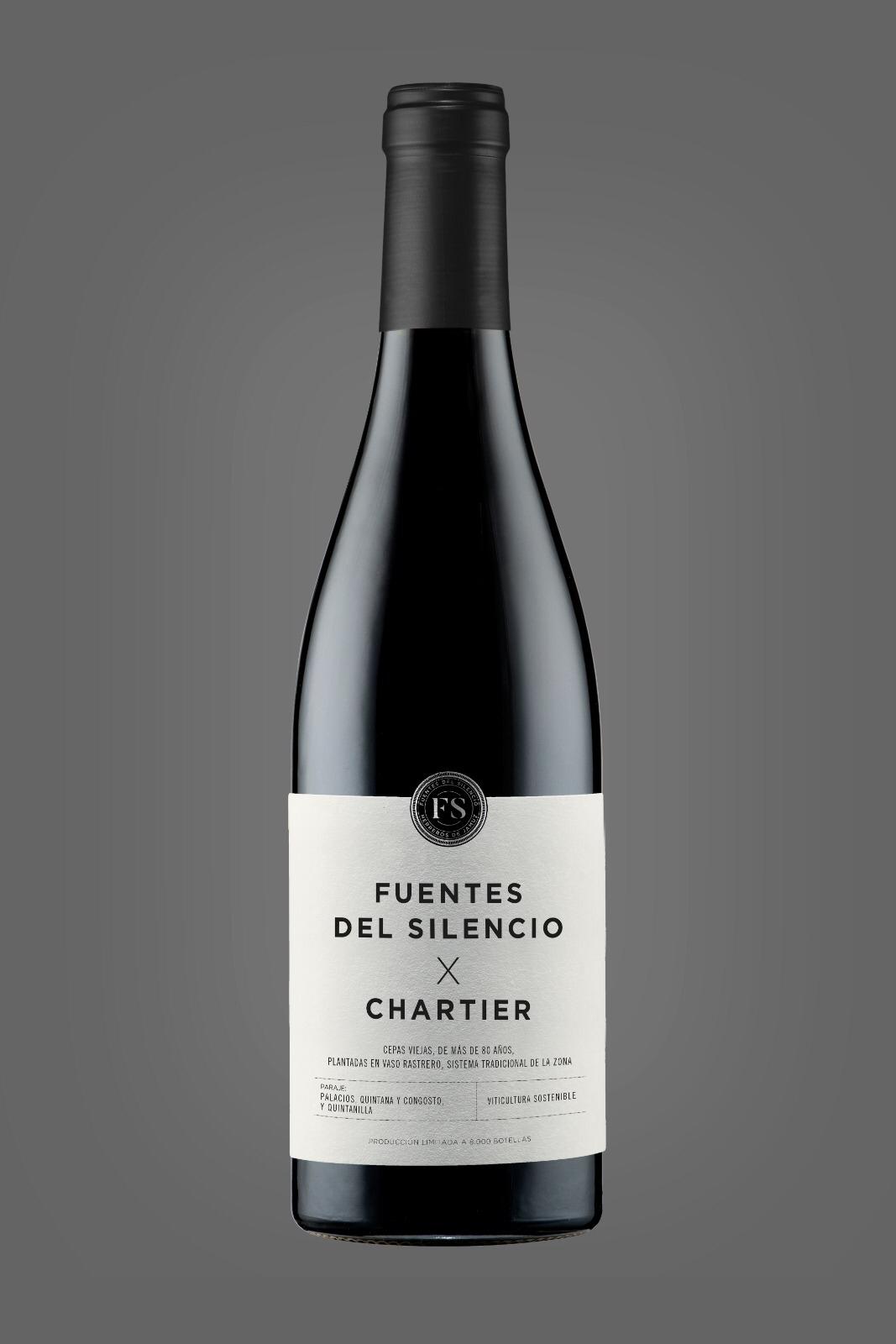 VITICULTURE: Recovery of centenary and pre phylloxera vines. In the process of organic vineyard certification.

CHARACTERISTICS OF THE VINTAGE: The 2018 vintage was characterized by a rainy end to the winter, which allowed for a green spring and a recharge of subsoil water reserves.  The beginning of spring was cool and with few rainy episodes, which allowed us to reduce the number of organic treatments to a minimum, and to maintain an optimal sanitary state until harvest.  Subsequently, temperatures gradually rose to normal levels, with a day of strong heat at the end of June, which did not last more than a week, so it did not affect the end of flowering.

During the months of August and September, the days progressed with mild temperatures, with cool nights and large thermal jumps, being very beneficial for the ripening of the grapes.  In these last months we also had no rainfall, with a dry end of ripening and healthy bunches, with thick skins and very aromatic grapes.

70% heart of Quintas plot: Wine made with grapes from the municipality of Quintana y Congosto. It is composed of 75% Mencía, 23% Alicante Bouschet and 2% Palomino and Doña Blanca. Quartzite, schist and quartz in a sandy matrix form the soils. The vineyard is located on a plain between 870 and almost 900 m altitude. The vines are 80 to 120 years old, some of them from the beginning of the 20th century. Organic viticulture. Fermentation is done with indigenous yeast in French oak vats. Maceration took place for 30 days on a bed of 50% whole grapes. Aged in French oak vats for 9 months and 3 months in concrete tanks.

20% Garnacha: picked from the blend of varieties from our plots in Herreros de Jamuz and Quintana y Congosto in Clayey and sandy soils based on Organic viticulture. Fermented in concrete tanks with indigenous yeast and on a bed of 30% whole grapes. Aged for 12 months in French oak barrels for two wines.

10% Prieto Picudo: Wine made from 100% Prieto Picudo grapes in a 80 years old vineyard located in Cillanueva at an altitude of 820 meters above sea level. Red clay soils with pebbles. Fermentation took place with indigenous yeast and maceration for 25 days with 25% of whole grapes. Aged in wooden vats for 12 months.