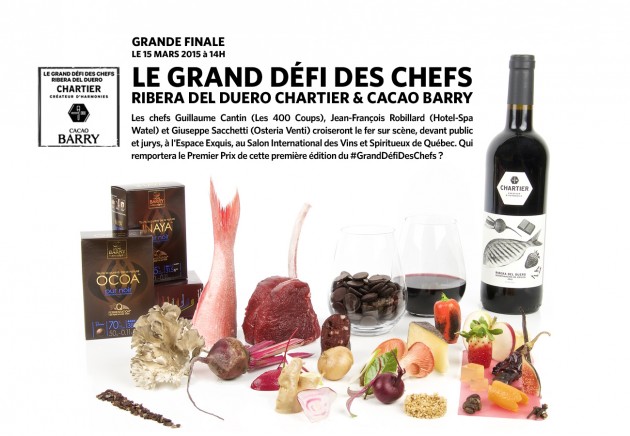 It is with great excitement that François Chartier «Créateur d’harmonies» and Cacao Barry announce the names of the three chefs who have earned a spot in the finals of the very first edition of THE GREAT CHEF CHALLENGE RIBERA DEL DUERO CHARTIER AND CACAO BARRY that will take place before a live audience on Sunday, March 15th, 2015, at 2 p.m., at the Salon International des Vins et Spiritueux de Québec.
The finalists are: chef Jean-François Robillard (Hotel-Spa Watel), chef Guillaume Cantin (Les 400 Coups) and chef Giuseppe Sacchetti (Cucina 753BT, ex-chef at Osteria Venti).
Last December, François Chartier «Créateur d’harmonies» and Cacao Barry announced the first edition of this annual recipe and wine and food pairing competition opened to all chefs and professional cooks in Québec. A total of 45 chefs registered to meet the challenge.
The challenge was twofold: chefs had to create a savoury dish (tapas, appetizer or main course) that was inspired by the aromatic profile of Chartier’s Ribera del Duero Spanish red wine (available at SAQ), both for the creation of their dish and of the perfect food and wine pairing, while incorporating one or more of Cacao Barry’s Plantation, Origins or Purity from Nature range of chocolates. This is a match made in heaven since Chartier’s Ribera del Duero Chartier was created on the same aromatic path as dark chocolate.
The incredibly difficult task of evaluating each and every one of those recipes was entrusted to a jury of several high-profile personalities of Quebec’s culinary world: Stéphane Modat (restaurants chef at Fairmount Château Frontenac), François Chartier (Créateur d’harmonies and wine merchant), Philippe Vancayseele (director of Montréal’s Academy of Chocolate™), Anne L. Desjardins (journalist for Exquis magazine), and Andrea Doucet Donida (marketing director for Cacao Barry Canada).
Three more personalities will join them for the finals on March 15th: Lesley Chesterman (food critic at The Gazette), Jean Aubry (wine critic at Le Devoir) and Roger Mezy, owner of Clos des Augustins, in Pic St-Loup (Languedoc), one of the wine-growers who collaborates with Chartier on his range of wines.
Don’t miss the finals of the Great Chef Challenge, March 15, in Québec City
At the finals in Québec City, each of the three chefs will make their dish for the jury panel, in front of a live audience, while explaining their approach and the ingredients they use, including the type of Cacao Barry chocolate they chose to use and how the aromatic profile of Chartier’s Ribera Del Duero inspired them and how they describe the harmony between that tempranillo-based wine and their culinary creation. The jury will taste all three dishes accompanied, of course, by Chartier’s Ribera Del Duero who is supposed to be enhanced by said dishes and will then chose the competition’s winner.
Members of the public are invited to witness this exciting Battle of the Chefs and, while the masters are cooking, they will be offered a glass of Chartier’s Ribera Del Duero and a piece of one of Cacao Barry’s fine chocolates.
13 000 participants to the public segment of the competition on Facebook
The competition had a public segment that was opened between Feb. 2 and March 2. People could vote for their favourite recipe and wine, chocolate and gastronomy fans alike answered the invitation to do so: over 13 000 people participated to this vote, electing, with 1872 votes, VINCENT RANGE, CHEF DU BLANC BISTRO, À SEPT-ÎLES, who won the People’s Choice Award of the Great Chef Challenge Ribera del Duero Chartier & Cacao Barry.
His winning creation inspired by the Ribera del Duero Chartier and Cacao Barry chocolates: Classic Wellington with foie gras, butter puffed pastry, beef mignon, mushroom Duxelles, chocolate and foie gras sauce, pan-fried Foie gras, celeriac purée and buttered greens with balsamic onions.
The 45 photos of these recipes can be seen on the following Facebook pages:
https://www.facebook.com/francoischartier.ca/app_448952861833126
https://www.facebook.com/CacaoBarry.ca/app_194975693850063
For the complete details and the winning Chef’s prize list as well as the public’s prize list, visit: http://bit.ly/1Bzun4J