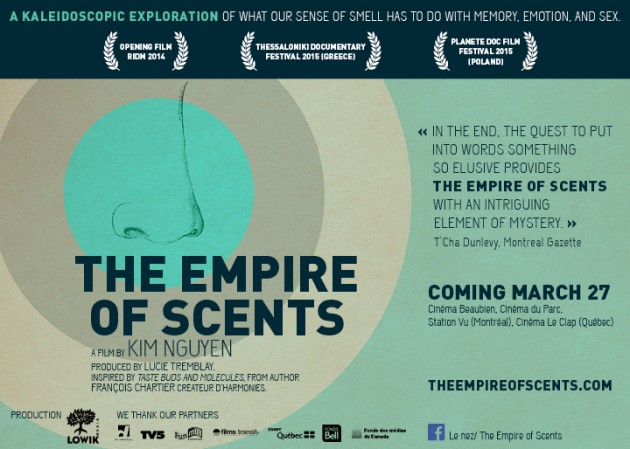 The Empire of Scents, inspired by the book Taste Buds and Molecules arrives in theaters in Québec and all around the world.

Inspired by François Chartier’s ground breaking book Taste Buds and Molecules – The Art and Science of Food with Wine, the documentary film directed by Kim Nguyen – who earned a nomination in the Best Foreign Movie category at the 2013 Oscars for his movie Rebelle – takes us on a fascinating journey around the globe in a quest to understand aromas and our relationship with them. The movie will shown in the following Québec theaters starting March 27: Cinéma Beaubien in Montréal ; Station Vu (8075 Rue Hochelaga #201, Montréal) ; Cinéma Le Clap, Québec City. More theaters will be added in April.
The film was also shown last week at the Thessaloniki International Film Festival, in Greece, as part of the Stories to Tell program. It will also be shown at the DOXA Documentary Film Festival in Vancouver in late April. It will then head out to Krakow, Poland, in May, to be shown at the Docs Against Gravity event, and to other film festivals around the globe. It will also be officially released in France in a few months.