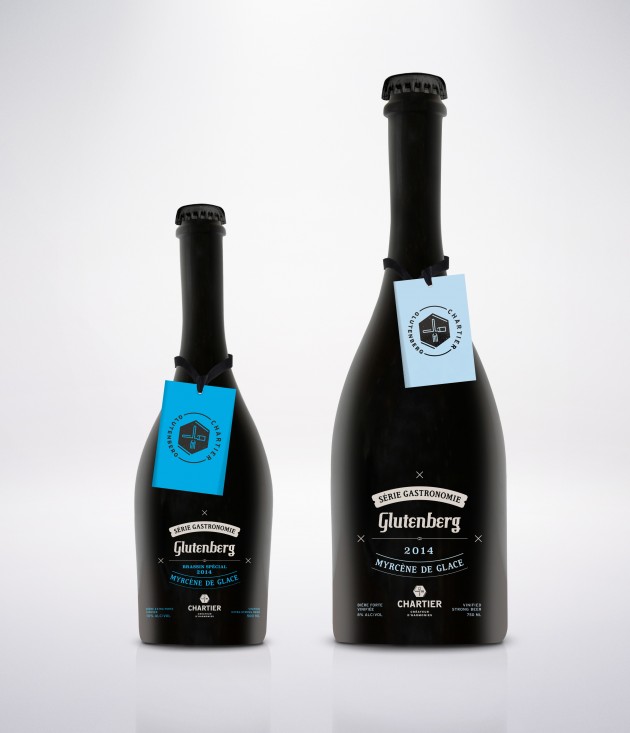 Brasseurs Sans Gluten «Glutenberg» and François Chartier «Créateur d’harmonies» conclude the first year of their collaboration by presenting the 4th and 5th beers in the Série Gastronomique. Following the wildly successful Impérial Sotolon (spring), Saison Froide (summer), and Solérone d’automne (fall), the team will once more rejoice its fans with not one but two versions of their new creation, a vinified ice beer, just in time for the Holidays.

At the crossroads between a beer and an ice-wine, the Myrcène de glace was frozen during the maturing phase to concentrate its aromas and flavours, simulating the effect of cold used to develop ice-wine. The added marc and must found in Vidal from the Léon de Courville vineyard (Domaine les Brome) highlight the aromatic power of this grape variety and its mango and lychee notes. In symbiosis with the myrcene, the molecule that provided the aromatic trail during the creation of this fine beer, the synergy literally increases tenfold!

Both ice beers will work wonders alongside blue cheese, foie gras, as well as any dish with aromas of mango, lychee, ginger, thyme, flat parsley, coriander seeds, nutmeg and rosemary, to name but a few. Serve it in a wine glass, just as you would a good wine.

The Myrcène de glace and Myrcène de glace Brassin Spécial will be available starting on the first week of December in most Glutenberg retail outlets. For more details visit our Web site seriegastronomie.com or give us a call at 514-933-2333.

Designed to enhance culinary experiences and crafted based on the aromatic science of world-renowned sommelier François Chartier, Glutenberg’s Série Gastronomie offers a selection of seasonal beers that makes it surprisingly easy to create harmonious beer and food pairings. The limited-production Série Gastronomie is 100% gluten-free and crafted for culinary lovers. Do not hesitate to serve these beers in a wine glass so as to fully appreciate all that they have to give.

Established in 2010 by long-time friends Julien Niquet and David Cayer, this budding Montreal microbrewery has so far created more than fifteen beers brewed from 100% gluten-free ingredients. Headed by master brewer Gabriel Charbonneau, this microbrewery has already created several award-winning beers such as the Glutenberg Red, the Glutenberg American Pale ale, and the Glutenberg Blonde, which were awarded, respectively, the Gold, Silver and Bronze medals at the 2012 World Beer Cup, the most important competition in the brewing industry. On December 2nd Glutenberg will launch two versions of its Myrcène de glace vinified ice beer, the 4th and 5th beers in the Série Gastronomie created in collaboration with François Chartier “Créateur d’harmonies”.

Glutenberg microbrewery products can be found at over 800 retailers in Québec and in the rest of Canada, as well as in 14 American States, Europe and Brazil. The brewery is booming thanks to its boundless quest for excellence in the creation of new and innovative products.

Chartier Créateur d’harmonies is a world-renowned sommelier and the leading authority in the field of aromatic harmonies, recipe creation and food and wine paring. He has published several books on cooking and wines. Among them are Taste Buds and Molecules, which was consecrated Best Cookbook in the World, Innovation Category at the 2010 Gourmand World Cookbook Awards, in Paris. Following this, his Papilles pour tous! series of recipe books received the Best Food and Wine Paring Book in the World award at the 2012 edition of said Gourmand World Cookbook Awards.

In October 2013, Chartier Créateur d’harmonies launch a wildly successful range of wines under the banner Vins Cuvées Chartier. These innovative wines were created by Chartier himself, “by and for the table”, and are available at Société des alcools du Québec. A year later, in October 2014, he also launched the Vins Harmonies range of wines that are available exclusively in IGA stores.

Léon Courville was, until October 1999, president and COO of the National Bank of Canada. His love of nature and of the land, his passion for wine and all the good things in life all contributed to push him to start his own vineyard in 1999. Facing Brome Lake in the Eastern Townships, his vines were planted on gravely and clayey hillsides that are particularly adapted to grape growing.