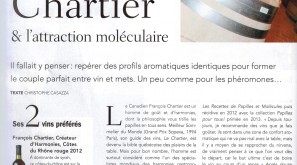 Here is a magnificent 2 page spread written by Christophe Casazza that was published in the September issue of the prestigious French gastronomical magazine Gault et Millau. A beautiful summary on the Chartier range of wines and its history! The books, aromatic science, Taste Buds and Molecules, elBulli, the documentary… It’s all there!

A genius idea: finding out identical aromatic profiles in order to create the perfect wine and food pairings. Think pheromones…

Canadian François Chartier is a man of taste and harmonies whose philosophy titillates your taste buds in boundless new ways. Voted best sommelier in the world (Grand Prix Sopexa, 1994, Paris), his wine guide, titled simply Le Chartier, has become Québec’s bible of gastronomical pleasure. However, for many, the man is first and foremost a world-renowned expert on gastronomical harmonies. His approach is as obvious as it is groundbreaking: establish the aromatic profile of a wine and find which foods correspond to that profile. And it works! It works so well, in fact, that his method was acclaimed the world over. Robert Parker calls him “pure genius!” and Ferran Adria, the former chef of elBulli fame, who he has collaborated with, says that Chartier is “the number one expert on flavors”. The first results of his research in harmonies and aromatic sommellerie, a science he invented in 2004, were published in his book Taste Buds and Molecules, which was voted Best innovative food book in the world at the 2010 Gourmand Awards. In 2011, he followed up with The Taste Buds and Molecules Recipes as well as the Papilles pour tous series, which also garnered some awards in 2013. “I’ve always recommended wines that are within a comfort zone that pairs well with food, but I do believe it is possible to get close to nirvana if one thinks about this from the onset, because ultimately, isn’t the goal to drink wine while one eats.” After twelve years spent researching his hypothesis, Chartier decided to undertake a smart new project: his own range of wines signed “Chartier Créateur d’Harmonies”. “I set out to have fun in creating wines that had perfect aromatic profiles for pairing with food. I selected varietals that corresponded to very specific aromatic profiles and paired them with food right from the start of the elaboration process. I tasted wines, selected and assembled them, aged and bottled them and became a trader of cuvées entirely created with wine and food pairing in mind.”

This range of wines will be offered in Québec on October 3 and later on in France. It is composed, for the time being, of four French and Italian wines: a Bordeaux Fronsac with a merlot dominant, a Côtes-du-Rhone assembled with syrah, grenache and mourvèdre, a Pays d’Oc I.G.P. from Languedoc assembled with chardonnay, grenache blanc and rolle and an IGT sangiovese from Tuscany. Always striving for excellence, Chartier worked in close collaboration with his loyal accomplice, Pascal Chatonnet, an oenologist from the Bordeaux region who is also the proprietor of the Château Haut-Chaigneau and of Laboratoires Excell. “Pascal Chatonnet is a world-class reference in oenology and viticulture. If all the wines in my range and the food that inspired them have achieved that level of aromatic concordance, it’s mainly because of him. We had tremendous fun travelling to all the vineyards we visited and learning together at all stages of this project.” Last June, while Chartier was at the bottling and (very original) labeling stage of his project, Québec director Kim Nguyen was filming his documentary The Pleasures of the Scents where he tells the story of Chartier’s quest for harmony and how it revolutionized the gastronomical world.

Dominated by syrah, this Côtes-du-Rhone follows the aromatic profile of pepper, one of the aromatic dominants of syrah, which is also found in thyme, lamb, and root vegetables.

1994: Best sommelier in the World, Grand Prix Sopexa, 2012
2004: Creation of the Harmony and Aromatic Sommellerie principle
2010: Taste Buds and Molecules, is voted Best innovative food book in the world at the Gourmand Awards
2013: Launch of his new range of wines signed François Chartier, Créateur d’Harmonies

“I tasted wines, selected and assembled them, aged and bottled them and became a trader of cuvées entirely created with wine and food pairing in mind.”